AACC: Annual Meeting of the General Assembly & Board of Directors

On 22 November 2022, the Austro-Arab Chamber of Commerce (AACC) held its 31st General Assembly Meeting together with the 32nd Meeting of the Board of Directors, which took place in-person at Palais Eschenbach in Vienna and simultaneously online via Zoom.

H.E. KR President Nabil Kuzbari commended the tireless efforts of AACC Secretary-General and team and praised the Chamber’s initiatives, which are expected to contribute a great deal to overcoming the obstacles the Chamber has been facing. Pres. Kuzbari added that the Chamber’s situation reflects Europe’s current economic situation.

AACC Secretary-General Mr. Mouddar Khouja presented his annual report at this meeting, whereby he emphasised the financial repercussions which the chamber has been grappling with caused by the outbreak of the COVID-19 pandemic and the current situation across the EU borders. SG Khouja also elaborated on measures to tackle these difficulties, primarily through the amendment of legalisation & certification processes, fee adjustment for legalisation, certification & translation services, and the introduction of a success fee for facilitating business in Arab countries. Complementing SG Khouja’s overview, AACC Treasurer Mr. Wolfgang Kaburek presented his annual financial report pertaining to the Chamber’s financial situation.

This meeting also witnessed the election of new members of AACC Board of Directors. As such, CEO of Borealis AG Mr. Thomas Gangl and Mr. Philipp Hammer-Purgstall, Managing Director Inosolve Consulting Service & Engineering GesmbH, were elected from the Austrian side, whereas Mr. Ali Almalki, designated Assistant Secretary General for Economic Affairs at the League of Arab States, and Mr. Imad Anis Hammad, representative of the Federation of the Syrian Chambers of Commerce, were elected from the Arab side.

Following the meeting, a panel entitled “New Business Horizons & Innovations in the United Arab Emirates” took place. An extended report on this panel will follow soon and will be available on AACC’s webpage: https://aacc.at/pages/reports.html

On 22 November 2022, the Austro-Arab Chamber of Commerce (AACC) organised a high-level panel on “New Business Horizons & Innovations in the United Arab Emirates”, which was held place in-person at Palais Eschenbach in Vienna and simultaneously online via Zoom.

Gathering more than 60 participants (in-person & online) and moderated by AACC Secretary-General Mr. Mouddar Khouja, the panel was marked by the attendance of participation of Arab ambassadors and diplomats in Austria, prominent representatives, as well as AACC board and regular members and interested parties.

Referring to the UAE as the “land of superlatives”, SG Khouja shed light on some of the country’s major achievements of the over the recent years, in particular the Emirates Mars Mission „Hope Probe“, the first probe to provide a complete picture of the Martian atmosphere and its layers, as well as Expo 2020 which took place in Dubai, and the remarkably speedy and unmatched development and reforms the nation has been witnessing.

In his opening remarks, H.E. Ambassador Hamad Alkaabi, Ambassador of the United Arab Emirates to Austria, highlighted the strong bilateral Austro-Emirati relations and the reinforcement of the diplomatic, cultural and economic ties between the two countries manifested through signing the “Comprehensive Strategic Partnership” in 2021. Referring to the Austrian Chancellor’s recent visit to Abu Dhabi where he met with the UAE’s president, Alkaabi stated that the two sides signed a joint declaration and a Memorandum of Understanding on energy security.

Alkaabi further elaborated on the UAE’s economic situation and investment environment, with a GDP growth estimated at 5-7% in 2022, +5 billion Euros worth of direct Austro-Emirati investments, a low-tax environment, the Federal Law on Commercial Companies which allows for 100% foreign ownership across many priority sectors, in addition to major investment incentives, such as the introduction of the Golden Visa, 0% income tax, research & development funding & rebate,  and 100% repatriation of capital and profits, all of which serve to render the UAE the top destination for foreign investments within the GCC & the Arab world and 15th internationally.

Lastly, Alkaabi presented the “Invest Emirates” initiative, the centerpiece of investment outreach and facilitation efforts by the Emirati Ministry of Foreign Affairs and in cooperation with all relevant stakeholders, and referred to the initiative’s website (www.investemirates.ae) as a rich source of information about the UAE’s economy, business environment, opportunities in priority sectors, FDI incentives, legal framework and corporate structures.

Mr. Thomas Gangl, CEO of Borealis AG, a global leader in advanced and sustainable chemicals and material solutions (namely polyolefins & base chemicals) owned by OMV-Austria (75%) and Mubadala-UAE (25%), presented the company’s vision and the exceptional success story for Austria and Abu Dhabi manifested through the Borealis-Borouge joint venture. Headquartered in Vienna and present in 120 countries with almost 7,000 employees, Borealis is a leading international provider of advanced and circular polyolefin solutions to various sectors (energy, healthcare, infrastructure, mobility, etc.), ranking 2nd among polyolefin producers in Europe and 8th worldwide.

Gangl provided an overview of the Borealis-Borouge partnership dating back to 1998 through 2022, the year that witnessed the successful listing of Borouge on Abu Dhabi Securities Exchange (ADX) which raised gross proceeds of over $2billion, thus marking the largest‐ever listing on ADX. He also elaborated on Borouge’s position in a way that leverages the strengths and competitive advantages of its shareholders Abu Dhabi National Oil Company (ADNOC (60%), a leading integrated oil and gas company entrusted to manage the world’s 6th largest proven oil and 7th largest gas reserves, and Borealis (40%).

Located in Ruwais, UAE, and attaining a leading position in the Middle East & Asia, Borouge is one of the world’s largest integrated polyolefin complexes, with an annual production capacity of 5 million tonnes. Aspiring to grow in order to meet the rising demand on polyolefin, the completion of Borouge 4 expansion project is expected to increase the annual production capacity to 6.4 million tonnes. Finally, Gangl highlighted Borouge’s sales in the 3rd quarter of 2022 amidst a challenging market environment, recording a revenue growth by 8% and an 18% year-over-year increase in sales volume.

Mr. Markus Susilo, Tax Partner at Crowe UAE, and Mr. Alessandro Valente, Director at Crowe UAE, delivered a presentation entitled “UAE Taxation Landscape: Updates and Opportunities for Foreign Investors operating in the GCC Countries”, through which they reflected on the massive increase in the UAE’s net inflows of foreign direct investments (FDIs) between 2015-2020 by more than the double (from 8.55 billion USD up to 19.88 billion USD).

The presentation also provided a glimpse of some of the most eminent changes implemented in 2022 with regards to direct tax, such as the UAE federal corporate tax, transfer pricing, tax residency rules and the Tax Procedures Law, as well as indirect taxes, such as the “Raqeeb” whistleblower programme, the “Emara Tax”, the amended Excise Tax Law, the amended VAT Decree Law, and the amended VAT Executive Regulations Cabinet Decision No. 99/2022.

Some of the additional changes introduced in the UAE in 2022 pertaining to global mobility include the new UAE Labour Law and its amendment, the introduction of new UAE visa options and grace period extension for expired visas, unemployment insurance, in addition to changes in overstay fines.

Throughout the last part of the presentation, the recently-introduced federal corporate tax (CT) was further clarified, and a comparison of transfer pricing between the UAE and other GCC countries and its interplay with VAT along with a case study served to provide the audience with a simplified-yet-detailed explanation of the corresponding taxes and amendments.

Towards the end, a networking lunch brought together the distinguished participants, offering a valuable opportunity to reflect upon the deliberations of the panel and paving the way for numerous potential partnerships.

A special thanks to AACC’s company members and partners for supporting this event: OMV, Crowe 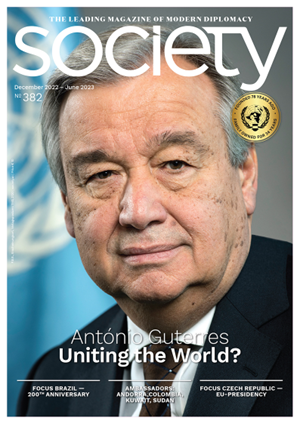